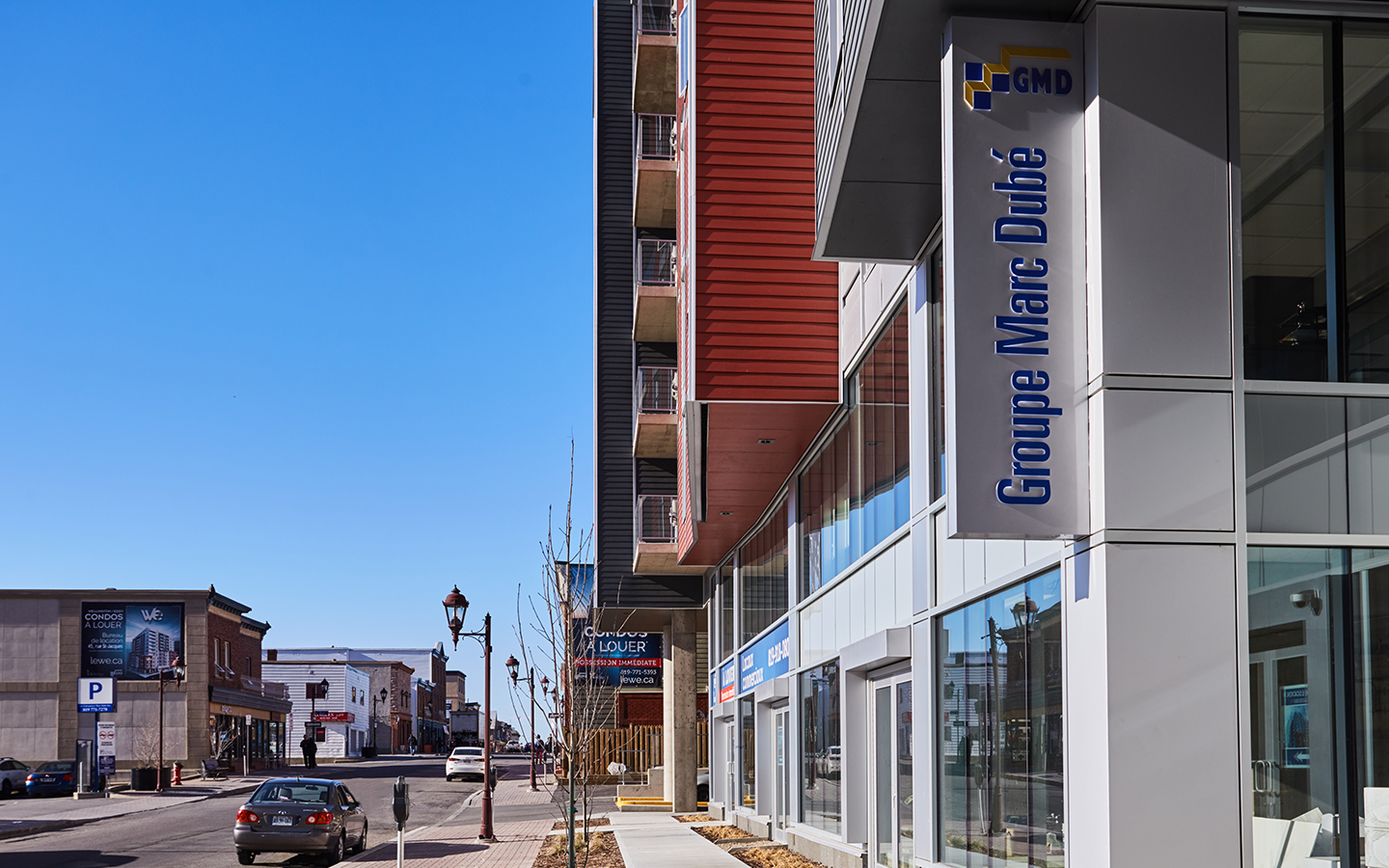 Mr. Marc Dubé is the president and founder of Groupe Marc Dubé ltée. Born in Hull and with a strong entrepreneurial spirit, he made his studies in economics at the University of Ottawa. Since 1985, he has continued to increase his acquisitions and grow by investing, particularly in real estate projects and mainly in the City of Gatineau, thanks to his business sense.

It was in 1985, during the era of the entertainment industry on “la Principale”, which became la Promenade du Portage, with its discotheques, small bistro-bars, small cafes and brasseries, that Marc Dubé seized his first business opportunity. Ambitious and visionary despite his young age, he approached and convinced brothers Jacques and Pierre Dussault to lease him the vacant lot at 173 Wellington Street so he could operate it as a parking lot. From then on and over the next 10 years, Les Entreprises Marc Dubé inc., with the growing demand for parking spaces, rented several vacant lots in the downtown core, owned by the Bank of Montreal, Mr. Pierre Moreau and Notary DesRosiers, to name just a few.

Marc Dubé continued to expand by diversifying into different industries, such as real estate, construction, buying and selling residential income properties, as well as snow removal services. With precision and perseverance in carrying out his work, Marc Dubé has amassed considerable gains, which made it possible for him to make his first large purchase.

In 1995, he acquired the lot at 173 Wellington Street and the offices from 31 to 37 Laval Street as well as 140 and 144 Wright Street, a 31,000 sq. ft. lot owned by the Dussault family. A big risk for this young 30-year-old entrepreneur who had to prove himself with a financial institution to obtain the necessary financing to carry out his projects.

In 1996, Marc Dubé purchased a vacant lot at 62-66 Promenade du Portage and in 1999 he purchased the lot at the corner of Hôtel de Ville and Laval streets. With a strong demand for parking spaces, mainly by employees and government employees who visit the downtown every day, Les Entreprises Marc Dubé inc. became the largest outdoor parking lot manager in the downtown core through his expertise and professionalism.

In 1997, Marc Dubé acquired Remorquage Henrie, a company founded in 1960. Expertly and with determination, he built and restructured the financially strapped company. He made major investments in equipment and new technologies and surrounded himself with a highly qualified and motivated team in order to distinguish himself from the competition, as well as improve the reputation of Remorquage Henrie and re-build the company’s credibility.

The new millennium ushered in the biggest accomplishments for this visionary business leader who had undergone several stages of growth, always by continuing to diversify his business into various industries. In 2004, he became involved with Groupe Heafey, a large property developer in the region, to acquire several lots ready for development in downtown Gatineau totalling 210,000 sq. ft.

Later, in 2011, Entrepôts du Plateau became a reality when Marc Dubé entered into a partnership to acquire a 6-acre lot in an industrial sector with a commercial building and mini-storage units. Located near a high-density residential area and considering the growing demand for storage and warehousing, Entrepôts du Plateau built 70 additional mini-storage units a year later.

When the Rapibus project was announced, this business leader seized the opportunity to turn his attention to trucking, discovering that there was a substantial demand in the region. Transport Dubé was founded in 2011 by Marc Dubé and his associates, brothers Guy and Luc Dubé, and they acquired five dump trucks. The company offers transportation services of bulk aggregate and construction materials as well as snow removal services, which enables him to consolidate his snow removal activities.

More recently, Groupe Marc Dubé ltée carried out its largest transaction with its partner, Groupe Heafey, to build a large-scale, $300-million, 4-phase property over an area of 140,000 sq. ft. Phase I of construction began in February 2014: The W/E, a large contemporary residential project in the heart of downtown Gatineau in the Hull sector. The 12-storey, 137-unit building with indoor parking will welcome its first tenants in July 2015.

Marc Dubé is involved in his community and generously supports many causes in the region. Since education and health are especially important to him, he makes substantial financial contributions every year to several organizations in the region, namely: